Visions of a Past Century 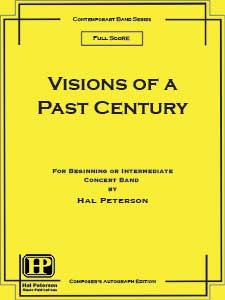 Program Notes: Visions of a Past Century was composed by Hal Peterson in the spring of 1974 as the result of a commission by the elementary band program in the Alisal School District, Ronald Bobb, director. The composition was written to celebrate the one hundredth anniversary of the founding of Salinas, California.

Visions of a Past Century provides an accessible work for young bands usable in a concert, honor band, or festival venue. To accommodate the technical abilities of young players, the parts are carefully structured for range and rhythmic complexity. Although the instrumental ranges tend to be narrow, the work takes advantage of chromatic tones easily playable at this level to provide a richer harmonic texture. The work is appropriate for elementary or middle school bands and is rated at Grade 1 to 2 in difficulty

Visions of a Past Century is composed in three short movements. The first movement, Prelude, is an introduction in ternary form containing pyramid chords in the winds, percussion build-up passages, unison passages and majestic chords. The second movement, Sunrise at Arroyo Seco, features the solo percussion section gradually making a long crescendo until the full light of a sunrise suddenly emerges, played with a fortissimo F major chord by the winds. Arroyo Seco is a mountain to the east of Salinas. The third movement begins with a short dedicatory chorale that transitions into a march entitled Procession to the Gabilans, which is the mountain range east of Salinas.

About the Edition. The full score forVisions of a Past Century is published in a spiral bound edition. The instrumental parts are paper.

View a pdf file of some of the full score pages. (Adobe Acrobat Reader plug-in required).

Listen to a MIDI-band recording of Visions of a Past Century.

Order a complete performance set which includes a full score and the 106 parts listed above.